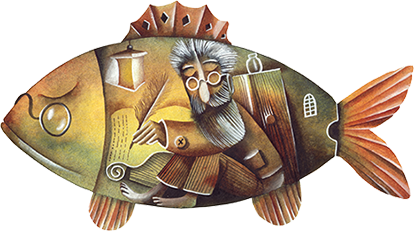 
These few lines certainly lay no claims to being a medical treatise nor do they seek to be yet another dissertation (they’ve already been published in sufficient numbers!) on the beneficial properties of Omega-3 (ω3) fatty acids.
If you’re interested in learning more about the subject you’re sure to find an abundance of updated scientific information online www.omegatre.it.

We’d simply like to give you something to reflect on.
Whenever someone discovers that “something” of natural origin is good for our health, the pharmaceutical industry takes possession of it. It grasps the financial opportunity and quickly sets the wheels in motion to sell the “active principle” (which, technically speaking, is what the “something” is called) through pharmacies, in colourful boxes and with catchy names. For example, acetylsalicylic acid was first isolated in 1828 by Johann Buchner from the bitter bark of white willow (Salix alba), which had for millennia been used to treat high temperatures and pain. Thus our modern aspirin began to take shape and become widespread. And, like acetylsalicylic acid, many others.

Omega-3 fatty acids are no exception to this process.
It’s widely known that people began suspecting their qualities by observing the indigenous peoples of the Arctic who have virtually no idea what a heart attack is thanks to their fish-based diet. Well, Omega-3 fatty acids have for years been lurking in our domestic medicine cabinets in the form of glossy, translucent gelatine capsules.

Now let’s ask us ourselves something: is taking a supplement or eating natural foods rich in a certain substance the same thing?
According to the director of the Preventive Cardiology Center of Boston’s Tufts Medical Center, Richard Karas, the most efficient way of absorbing beneficial active principles is by eating a varied, healthy diet. The reality is that many choose to take them in the form of a pill. However, Karas stresses that the two methods don’t have the same effect on our body. He is not the only scientist to have that opinion.

Another point worth considering is that consumers often underestimate the overall composition of these food supplements. The amount of ω3 fatty acids in those shiny capsules is quite low (even less than 50%), the rest being composed of other kinds of fatty acids. Also, the oil in the capsule should have good bioavailability, i.e. efficiently absorbed by our body. In other words, all that glisters is not gold … nor is it “good” ω3 fatty acids. Therefore, it’s better to take fewer allegedly miraculous pills and rather keep to a healthy lifestyle and good diet.

A few years ago a series of tests revealed that, if cooked properly, a trout fillet weighing just over 100g (approx. 3½ oz) provides a “pill-sized” dose of ω3 fatty acids. And this is where we get to the reflection we mentioned at the beginning and, consequentially, our question. Which is better: a rather sad glass of water and a pill of uncertain effect, or a delicious trout fillet, let’s say Mediterranean-style (with tomato and basil), with “robust” ω3 fatty acids, washing it down with a good glass of the juice of the grape?
Better to pop round to the fishmonger’s than the chemist’s.

We at Friultrota have carried out several Omega-3 studies and the products we offer are rich in these invaluable fatty acids, thanks not least to our particular processing methods, which conserve the fish’s intrinsic qualities.

Not only Omega-3 …
Omega-3 is currently a very popular topic but let’s not forget that fish is also rich in phospholipids, which are lipids that are important for the nervous system. Fish is also one of the greatest sources of available proteins in our diet. It contains about 15%-20% of these proteins of high biological content. They are easier to digest than meat protein because fish has much less connective tissue, which is why it requires lighter cooking. The greatest amounts of mineral salts in fish are calcium, phosphorous and iodine. Vitamin A is the principle vitamin but there are also good concentrations of B and D.
We should eat fish at least two or three times a week to ensure that its invaluable nutrients become our allies in helping to keep us healthy.
Fresh fish, of course, better still if ready to eat!! 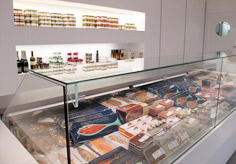 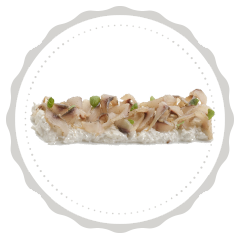